History of the Monastery

Vác is a more than one thousand year old historic site of the Hungarian history. At an outstanding point of the town, already in the Árpád era had a castle and a diocesan cathedral. According to the Hungarian chronicle, this cathedral was founded by our King Géza I who – according to several sources – was buried here in 1077. The first cathedral was destroyed by the Tatars on the Palm Sunday of 1241. After that it was re-built in Gothic style. From 1474, Báthory Miklós Bishop reconstructed the cathedral and the bishop’s palace, as well, in Renaissance style. Vác was occupied by the Turkish troops in 1543, but they earlier, already in 1541, they blew up the cathedral with gunpowder. During the Turkish era there were several battles for the occupation of the castle of Vác, some parts of it were blown up even several times.

The members of the Franciscan order already appeared in Hungary during the life of St. Francis of Assisi; from 1239 their first order province was called Hungarian Order Province. In 1523, on the grand chapter two order providences were established from the Franciscan monasteries of Hungary: the Marian Order Province named after the Virgin Mary, and the observant monasteries Order Province named after the Savior (Savior Province1, cca. 70 monasteries). During the following centuries, due to the Reformation and the Turkish conquest the number of the Franciscan monasteries also decreased.    In 1689, after the liberation from the Turkish rule, the border of the two order provinces was determined in the Skalica-Nitra-Vác-Danube line. In the Middle Ages, there were a lot of Franciscan, Salvatore monasteries along the Danube, but after this decision not one was left, and for this reason they asked from the Bishop of Vác to allow them to settle down in Vác. Their request was heard in 1719 when the Bishop of Vác, Count Althan Mihály Frigyes granted the castle to the Franciscans. In the document dated on 14 April, 1719, the Bishop makes reference to those services provided by the Franciscans for the maintenance of the Catholic faith in the Diocese of Vác during the Turkish era and in order to prevent the spread of the Reformation.1 The other reason was “ that the said Savior Province still has not had any monastery beside the river Danube where they could deposit and preserve the materials and other things delivered by the said river for their own buildings and needs”.

The site was handed over to the Franciscan Order on 3rd May, 1719, within the frame of a ceremony held on the feast of Finding of the Holy Cross. For this reason, the Franciscans decided to give the Holy Cross name to the new church and monastery. A cross was also set up at the site of the church to be built. There was also a house (later the bakery house) next to the ruins where the first monks could move in.

Monastery at the bank of Danube

The foundation stone of the church was laid in 1721. The church construction was supported by the donations of Count Koháry István who donated 20.00 rénes Forints for the construction of the church, and an additional 10.00 Forints for the maintenance of the monastery. Urban Linz mason was probably the master builder. In 1726 the sanctuary of the church and the town side part of the monastery was completed and consecrated. At this time 4 monks and 3 lay brothers moved in the monastery (Prior Csaszta Ráfael, Tuchinszky Miklós preacher, Kartoffel Lajos German preacher, and Lipták Dénes alms collector and additionally Heblink Sándor, Várady István and Wizi András assistants.). Six years later already an Order Province meeting was held here. In 1731 the residence of Vác received the convention rank, its first Gvardian was Szilágyi Balázs. In 1732 one of the Salvatorian Order’s schools operated within the walls of the monastery: the students studied philosophy here. In the 19th century, Franciscan seminarists also arrived here from the order province of Bosnia. In the second half of the century the Salvatorian seminarists attended the grammar school of Vác, the monastery already served as their home only.

The construction of the Danube side wing started in 1741, and the construction works of the monastery was completed in 1751. The works among others had to be interrupted due to the epidemics of plague in 1740-41. Two monks of the monastery undertook the service among the ill people: Blahó Pius and Dull Ferenc who finally became victims of the epidemic, they were buried in the square in front of the church, at the foot of the cross established in 1739.

However, on the main altarpiece of the church completed in 1751 you can see not the Holy Cross, because in honor of count Koháry István his patron saint, Saint Stephen, the first martyr is represented in the company of several other saints. The altar was made in 1729 and it costed 3286 Forints. According to the latest art history investigations, it is the work of A Falkoner Polikárp, painter from Buda, and Hörger Antal sculptor. It is one of the Hungarian Baroque altar having the richest decoration including fourteen pictures and a sculpture of twelve saints. The construction of the side altars started in 1727 with the altar of St. Anthony of Padua. Nowadays, we do not have some of the altars of the 18th century, or there are such one, as well, on which the altarpiece was replaced. E.g. the altarpiece of St. Ann was changed to be the altar of the Holy Cross, while after replacement the altar of the Guardian Angels became the altar of St. Joseph.

From the founder Althan M. Frigyes Bishop they received a piece of the Holy C ross relic. Althan M. Károly granted a picture of St. Anthony of Padua what he received in Italy, in Bari from the Franciscans. In the Chapel of Loretto there was a copy of the Czestochowa Grace Image of the 18th century, which presently can be seen on the wall of the church.

The major part of the nave was built in 1757, the roof in 1759 from donations. The construction works of the church were completed in 1760. In 1761 the main altar was relocated, removing the sacristy and porch behind it. On July 27, 1766, the church was consecrated.

From the end of the 18th century the monastery carried out industrial activity, as well      as a Franciscan cloth manufactory operated here. For all the Hungarian Franciscans – not only the members of the Salvatorian Order Province – the material of monk’s cloths was prepared here until the mid of the 19th century.

In 1926 Horváth Zénó established the Kapisztrán printing company in the monastery of Vác. In 1938 the square was covered by reinforced concrete roof for the safe accommodation of the printing machines. The following was written in the Franciscan calendar about the Kapiszrán printing company: „ In the old days, in a quiet cluster, with a goose feather, the grizzled monks bending on the parchment drew the beautiful letters, but now already among the old walls of the Franciscan monastery of Vác young monks are putting in order the lead letters all the day and the silence of the monastery is broken by the noise of the machines throwing out the nicely printed papers..” For example, in 1948 from 22 lay brothers 16 already worked in the pressing company or the bindery.

After the Monks left

On 6 September, 1950 the State Security Service (ÁVH) appeared in this monastery, as well, but did not transporte away the monks, “just” prohibited them to wear the monk garment. At the end of the year the printing company was liquidated. It contributed to the liquidation that the Kapisztrán Printing Company printed flyers 24 hours a day, in several hundred thousand copies for the Soviet army between December 1944 and March 1945. In the 1960’s – similarly to other monasteries – from the monk cells flats were made as in 1950, at the time of nationalization the building was given to the army.

In the second half of the 20th century the workshop of the famous bookbinder Váci György got a place in the building of the monastery. Szabados Anzelm, earlier Franciscan monk, in addition to the herbs enthusiastically dealt with the history and reconstruction of the church, and from 1970 was the vicar of the Holy Cross church. The area next to the monastery was named “Garden of Anzelm” after him.

In 1978 the Vác Department of the Pest County Archives got the major part of the monastery building: the department worked here until 2004. In 2006 the building was emptied.

In 1992 the Franciscan Order applied for the ownership right of the monastery building and received it back in 2004.

The archeological excavation of the castle of Vác started in 1912, the works were continued from 1962. Between 1978 and 2002 the excavations were carried out by Tettamanti Sarolta. Then for a decade archeologists worked on the site, but did not cover the prospecting pits. At some places the holes put at danger the stability of the monastery and church, crack appeared on the walls. Between 2013 and 2015 Batizi Zoltán carried out investigations, and according to certain source it can be imagined that he found the place of the tomb of Géza I.

Between 1982 and 88 the archeological investigation of the walls of the Vác Castle was carried out and their reconstruction on the Danube side. The work of Blaskó Mihály, jr., the statue of King Géza I was set up here in 2000 and you can see it in our days, as well.

The cooperation between the Piarist and Franciscan Orders of Vác was realized not only during the plague epidemic of the 18th century, but also in 1919, during the period of the Hungarian Soviet Republic when three Piarist monks expelled from their monastery were admitted in the Franciscan monastery of Vác.

In 2016, at the completion of the archeological investigation, the reconstruction of the Franciscan monastery of Vác has started. Both the outer and inner renewal was made: the works were completed by spring of 2020 in order to get a new function and be the home of the Outlook Piarist      Career Guidance and Labor Market Development, Methodological Center (Piarist Outlook Center). This center was established on 31 January, 2018 in the frame of the cooperation between the two orders. „The mission of the Piarist Outlook Center is to support the career planning of the students, young people needing special personal attention, the execution of researches assisting their development of skills in the education-training environment and to inspire their successful integration in the labor market using an individual follow up method, using the higher level of the actual scientific and technological results, tools, methods and the retaining and strengthening power of the community.”3

The reconstructed monastery building will be the site of the personal and group sessions assisting the Piarist Outlook Center provided career planning especially for children and young people needing special personal attention, where the methodological workshop supporting the career planning also operates. The special feature of the Piarist Outlook Center is a robotics workshop being used in the course of developments. In addition to assisting the young people living with disabilities, the center’s goal is also to help the drop-out youngsters.

The Vác building of the Piarist Outlook Center, the reconstructed monastery was handed over on 25th August, 2020, on the Memorial Day of Joseph Calasanctius. 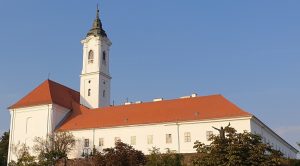